In order to achieve its objectives, from the very beginning it has taken a very different path from what was usual for the production of Vinho Verde: refusing, for example, to introduce CO2 into wine, which was then the style of Vinho Verde or to accept the settlement defined for the Amarante sub-region, without previously studying the behavior of the grape varieties in their terroir.

Thus, he has created and has been in production since 1996 the wine Quinta de Sanjoanne Terroir Mineral, from the grape varieties Loureiro and Avesso, with a crystalline and deep profile, that allows it to evolve in bottle and improve with age.

In this way, it also contradicted the common sense that Vinho Verde could only be drunk young and that it had no capacity for evolution, showing that by working for quality, this wine can grow old like any other wine of character.

With the increasing of its terroirs, the behavior of the grape varieties and the numerous trials in the vineyard and the wine cellar, it was readjusted to the vineyards for the production of the various wines of Quinta de Sanjoanne, which in the meantime was creating and developing:

At the end of the 90's, with the development of the activity, the family of João Pedro Araújo decided to acquire Quinta da Vegia, in order to also produce red wines.

Located in the Region of Dão, near the village of Penalva do Castelo, currently has 20 ha of vineyard. Its vineyard was followed by a careful selection of vine varieties - Touriga Nacional, Tinta Roriz, Tinta Amarela, Alfrocheiro and Tinto Cão, Encruzado and Bical - in order to create Quinta da Vegia wines.

At present, Casa de Cello has the following wines from Dão on the market: four reds, one rosé and two white wines:

On both quintas, Sanjoanne and Vegia, Casa de Cello has always been concerned with environmental responsibility.

In this way, for all cultural decisions, as well as for the protection of its vineyards, Casa de Cello practices "sustainable farming" in order to produce healthy and high quality grapes and ensure the expression of its "terroirs" "In the wines it produces.

As an independent wine-grower, Casa de Cello controls every stage of the process, from the vineyard to the commercialization of the wines: we cultivate the vines, harvest, vinification, aging and bottling in the quinta. 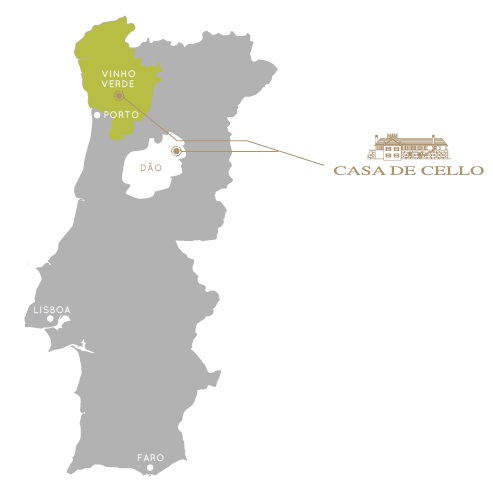